Optical fiber is the most effective way of carrying data available. Each strand of fiber is thinner than a human hair, and yet single-mode fibers can carry up to 32 terrabytes of data per second (TB/s). It is the optical fiber’s data carrying capacity that enables the broadband world that we live in today – streaming movies, 5G, sending videos and more.

Unlike copper cables, which transmit data using electricity, optical fiber uses pulses of light (photons) which are sent in rapid succession from a transmitter to a receiver, 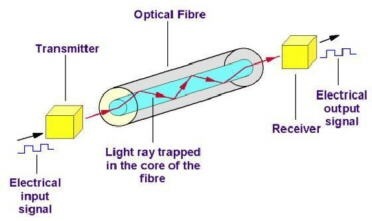 where a photocell-equipped optical receiver decodes the digital light signals and converts them back into electricity. The photons are contained in the fiber’s core – an ultra pure area of glass that ranges from just 9 microns, for singlemode fiber to 50 or 62.5 microns for multimode fibers. In comparison, a human hair is approximately 100 microns in diameter. Surrounding the fiber core is an outer cladding (also glass) which uses a lower refractive index to contains the light signal and prevents it from radiating out of the fiber core.

Among optical fiber types, multimode continues to be a more cost-effective choice over singlemode for shorter reach enterprise and data center applications. While the cost of multimode fiber  cable is greater than that of singlemode, the optics and connection costs dominate the total cost of a network system, dwarfing variations in cable costs.

Traditionally, singlemode optics have traditionally been more expensive than their multimode mode counterparts. This holds true today. On average, singlemode transceivers still to cost from one-and-a-half to five times more than multimode transceivers, depending on the data rate. As faster optoelectronic technology matures and volumes increase, prices will come down for both, and the cost gap between multimode and singlemode will likely decrease. Although advances in multimode fiber technology continue to make it an attractive option.

Multimode transceivers also consume less power than singlemode transceivers, an important consideration especially when assessing the cost of powering and cooling a data center. In a large data center with thousands of links, a multimode solution can provide substantial cost savings, from both transceiver and power/cooling perspectives.

Finally, the fact that multimode optical fiber is easier to install and terminate in the field than singlemode is an important consideration for enterprise environments, where frequent moves, adds and changes are required.  This advantage extends to cleaning, where a small amount of dust/contamination could create significant attenuation on a singlemode connector, but only slightly increase the loss of a multimode link — just look at the core sizes of the fiber types below to see how even a tiny speck of dust could significantly impact the light carrying capacity of a singlemode fiber.

Are there any special requirements for the optical fiber used in passive optical LAN?

Each ONT end device just requires one strand of single mode fiber. And the connectors typically used in passive optical LAN are SC/APC angle polish connectors. Note: some manufacturers now offer a way to leverage multimode fiber in applications where the fiber plant was already installed.

Are there any special requirements for the optical fiber used in passive optical LANs?

In a Passive Optical LAN each ONT end device requires  one strand of single-mode fiber. The connectors typically used in passive optical LAN are SC/APC angle polish connectors on the end. If you have existing single mode in your backbone, then you’re halfway there.

Does a Passive Optical LAN (POL) use multimode or single-mode fiber?

Passive optical LAN (POL) architectures primarily use single-mode fiber because of the medium’s high capacity and ability to support long link lengths — up to 20 km. In a POL architecture. In a POL, a passive single-mode fiber network runs down to the desktop, through an optical splitter and into a thin-client edge device or Optical Network Terminal (ONT). Recently single-mode to multimode optical splitters have been introduced that enable cost-effective re-use of existing multimode fiber cabling for Passive Optical LANs inside buildings and across a campus.

What fiber is typically being used with the 200 400 Gig circuits?

Most likely you are looking at either OM4 or OM5 multimode fibers. Of course single mode will always be an option, but on the multimode side you have OM5 fiber, which is optimized for the short wave division multiplexing (SWDM) so depending on the distances you need to support, those to fiber types will give you the most cost effective solution.

Some important changes to TIA-942-B Data Center Standard include:

Other relevant changes include:

What type of fiber do you recommend for data center applications?

To support the high bandwidths required in data centers, most companies are installing at least OM4, laser optimized multimode fiber. Some companies are installing single-mode fiber, but that requires more expensive optics. A new option that is emerging is OM5, a wide bandwidth multimode fiber which allows short wavelength division multiplexing. This means the fiber can carry multiple wavelengths of light over the same fiber, increasing bandwidth significantly and yet still allowing the use of lower cost multimode optics.

What is wide band multimode fiber and how is it used?

WBMMF is a relatively new fiber medium specified in ANSI/TIA-492AAAE and given the designation of OM5 multimode fiber by ISO/IEC and TIA. This 50/125 µm multimode laser optimized fiber was originally developed to support Short Wavelength Division Multiplexing (SWDM) and supports 4 wavelengths of 25Gb/s transmission for an aggregated 100 Gb/s transmission on a duplex LC link, a popular and familiar interface in the data center. WBMMF supports four wavelengths between 850 nm and 953 nm, using multimode optics. WBMMF was designed for use in data centers.

Should I install singlemode or multimode fiber in my network?

Yes. ANSI/TIA/EIA-568B.3 sets performance specifications, minimum bend radius standards and maximum pulling tensions for 50/125-micron and 62.5/125-micron fiber optic cables. For inside plant cable, the fiber cable bend radius is 10 times the cable’s outside diameter under no pull load, and 15 times the cable’s outside diameter when subject to tensile load performance measurements and qualification processes. If you are interested learning more about the status of BIMMF or participating in the discussion you can access the schedule for TR-42.12 here and download recent meeting reports.